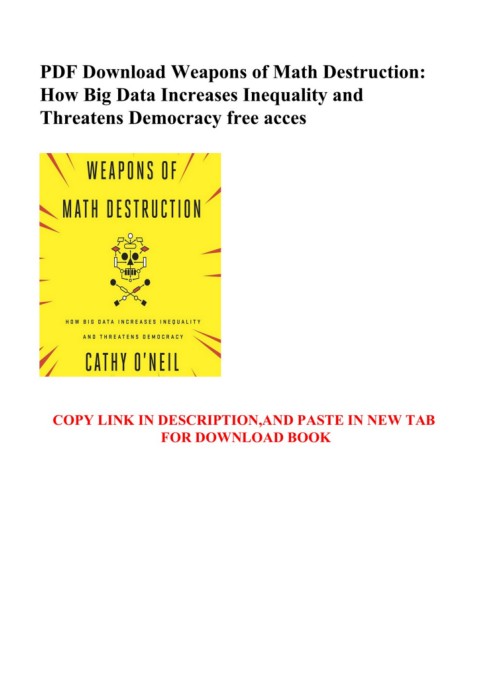 Computers As Weapons Of Math Destruction

Weapons of Math Destruction: How Big Data Increases Inequity and Threatens Democracy is a new book by Cathy O’Neil that examines the social impact of numerical algorithms, which are used to evaluate large sets of data sets. It explores how some powerful big data algorithms are being used to exacerbate already existing inequality. In a previous article, I described some of the ways that computers can create false positives when they serve up results that are pro-forma or invalid because of their artificial intelligence or ability to discern relevant data from noise. In Weapons of Math Destruction, O’ Neil explains how falsification or non-relevance can creep into this process. In fact, she says that this has already started to happen with some of the most popular algorithm-based forensics tools used by law enforcement. According to her, police departments have been using these algorithms for years to justify higher budgets and higher criminal conviction rates.

O’ Neil claims that once people are given a tool, they will use it regardless of whether it makes sense or not. In her argument, she argues that the techno utopia she depicts in the book, where everyone has access to big data, is akin to a giant step toward identity theft, where unscrupulous programmers can steal your fingerprint, use your social security card, or even know your credit scores. If we allow the seemingly limitless potential of big data to corrupt our society, then she warns, we could be headed for a much bigger crisis than the current fiscal meltdown.

Identity theft is a serious threat, especially considering the recent high-profile cases in which hackers gained access to the identities of millions of Americans. However, there is also the potential for misuse. As human beings become more comfortable using electronic means to facilitate day-to-day life, we may be seduced to use such devices irresponsibly. It is an ironic turning point in history when the greatest technology of all, computers, is being used against us. We can be sure, therefore, that identity theft will rise along with the unchecked exploitation of digital technology.

Machines can take our work, multiply it millions of times over, and do it automatically. They can also allocate resources without our consent or control. With the potential for abuse is running rampant, perhaps the most obvious outcome is economic disparity. In order to solve problems like these, some people (including O’ Neil) feel that we need a system of redistribution based on mathematics.

redistributive programs, such as universal health care or income taxation, are rejected by those who think in terms of weapons of math destruction. Why? One reason is that such programs increase efficiency, and as efficiency goes up, so does the demand for goods and services. Consequently, some see their existence as a potential weapon of destruction. Others, who do not see the disastrous consequences, allow that the redistributive schemes of today provide a better bargain than no program at all.

When we look closely, however, there is a difference between redistributive and efficiency maximizing programs. For example, a universal health care plan does not redistribute money upward. Rather, it provides a baseline payment, regardless of need, to everyone. Because of this, people who might have otherwise never received healthcare are now able to receive it. By increasing efficiency through large-scale computing, computers can serve as a weapon of math destruction in other ways, such as reducing medical errors.

Computers, it turns out, are excellent weapons of destruction as well. If we could send the same amount of data at the same rate, then we could send it by way of a laser to an eye on Mars. And, we already have sent data by this method to Mars. A laser could send identical amounts of data to Earth or to any planet orbiting nearby. Thus, we know that a planet outside our solar system may be capable of supporting intelligent life, perhaps as advanced as human beings.

This represents the biggest potential for harm ever created by science. In fact, the potential for such weaponry is probably already being exploited. By collecting and analyzing large volumes of data, computer scientists are discovering what type of world would be most suitable for potential life. They are discovering what type of resources might be accessible and they are discovering what kinds of intelligence might be possible. We see such weapons of math destruction everywhere in our world and it is likely that they will become even more influential and destructive as our understanding of the universe and of life expands.