“Weapons of Math Destruction: How Big Data Increases Inequity and Threatens Democracy” by William Poundstone is a blistering broadside against the use of advanced mathematics for the sake of power. It is a book that I had not read until just the day before writing this review. In fact, I usually get myself all tied up in other reading, but when I saw the book’s table of contents, I was ready to throw it out the window because of its thesis. 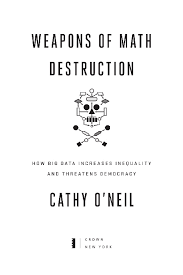 The thesis of Weapons of Math Destruction is that technology, while making our lives easier and faster, also creates unprecedented levels of wealth inequality. In fact, as the book makes clear, there is nothing progressive about the pace of technological change. Rather, the book argues that techno utopia – that is, the promise of improved tools and technology for the common good – is inherently unstable, because as individuals and societies become richer, there comes a point where the interests of the haves become indistinguishable from those of the have-nots. At that point, people are left with neither the time nor the money to invest in new technologies that might bring them more prosperity, nor the will to create such tools and technologies, and the once widely shared democratic political order ceases to exist.

In the past, scholars have often complained that the use of complex mathematical algorithms in the credit card industry, patenting processes, and the like, create inefficiencies and gaps in the economic efficiency that all of us must endure. One of the most fundamental problems cited is the way that these algorithms and their corresponding computer programs treat different people and diverse kinds of businesses differently. Some economists have claimed, correctly, that the existence of a Feedback Loop makes economic activity intrinsically inefficient. As computers are able to process large amounts of complex information, they can process all of the different pieces of the market in a similar way, leading to the de-schemalization of the financial marketplace. Even so, while many economists have embraced the idea of the Feedback Loop, they still do not fully understand how big data can exacerbate the problems inherent in the Feedback Loop, or how it might be able to fix them.

One of the most severe implications of the existence of large numbers of algorithmically-muted, self-adjusting, self-policing systems is the impact on the integrity of our financial markets. Algorithms and their use by regulatory agencies to reduce or prevent anti-business or predatory lending practices threaten the legitimacy of our financial markets. If a lender used algorithmically-manipulated price discrimination to serve their own interests at the expense of ordinary citizens, that practice would amount to securities fraud, and there would certainly be substantial personal and business consequences for the lender. Similarly, if an insurer used overly-generous price discrimination to benefit themselves, or to benefit only certain groups of people who might potentially be a client base, then that practice would amount to securities fraud and anti-social behavior. Such cases would obviously place insurers and other insurers in competitive jeopardy.

Of course, people who are concerned about these implications don’t really want competition between insurers and the rest of us, but they do want meaningful competition between models of growth. Still, if we accept the premise that the purpose of regulating and protecting the economy is to create a level playing field where all individuals and businesses are playing by the same rules, then anyone who claims that technology threatens the purpose of regulation should be asked what he or she thinks about the inclusion of social norms in any such algorithmically-manipulating tool, and whether that inclusion makes that tool good enough to serve the purposes of regulation. Not only should the government include social norms into any potential algorithm of regulation, but this inclusion should extend to all potential tools of regulation. If that is not done, we will always be faced with a situation in which some laws are bad and others are good, when all we’re trying to do is regulate bad behavior. Therefore, while there is certainly room for improvement in the way that regulators think about the relationship between law and math, it would also be nice if folks on all sides of the debate understood the nature and purposes of the market itself. Indeed, I’d like to see some broad, inclusive discussions of the issues raised by big data and techno-utopian fantasy.